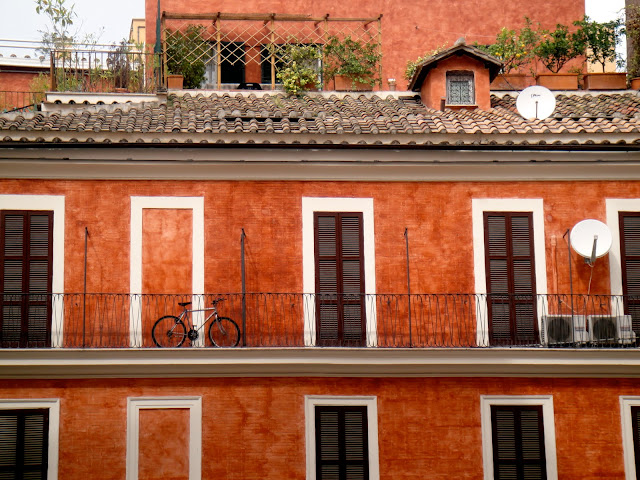 bicycle parking
Posted by Eleonora Baldwin at 9:47 AM 18 comments: 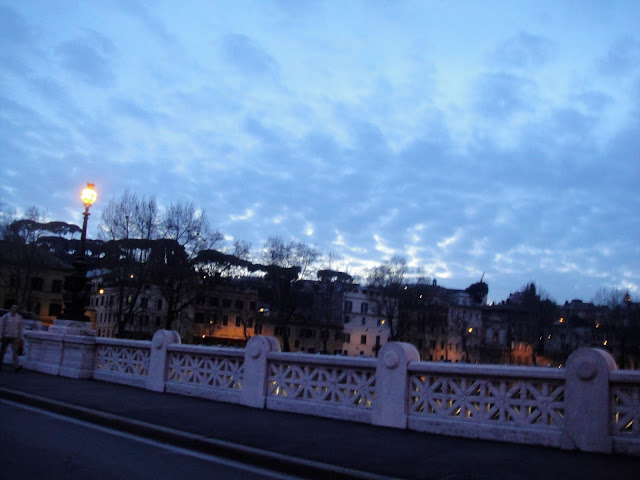 leaving Lungotevere Gianicolense behind
My dear friend and talented photographer and his bovine alter ego «Louis» have launched a new meme, The Sunday Bridge Series. Every Sunday he (and «Louis») will feature images of the Golden Gate Bridge.

The meme invites friends to contribute with photos of bridges in their area.
For more Sunday Bridge Series images from around the world, visit San Francisco Bay Daily Photo
Posted by Eleonora Baldwin at 9:35 AM 11 comments: 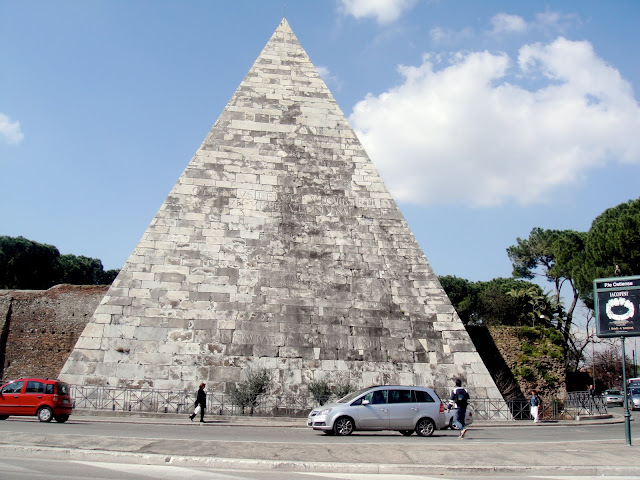 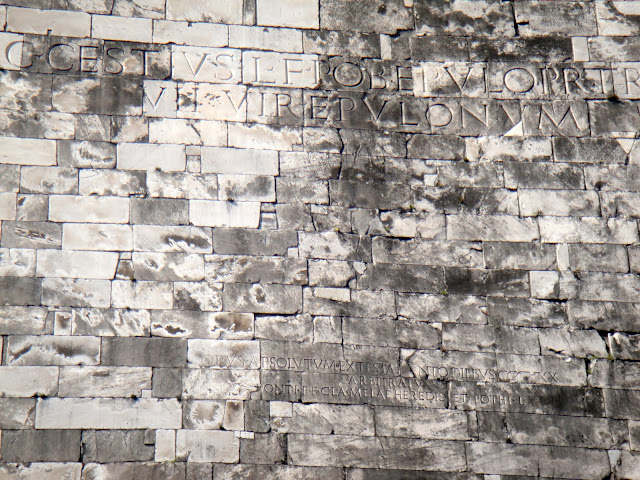 fine print
The tiny inscription on the east facing side of the Pyramid of Cestius below the larger dedicatory one, records the circumstances of the tomb's construction: "This work was completed in accordance with the will in 330 days under order of Lucius Pontus Mela, son of Publius of the Claudia family, heir; and Pothus, freedman."
In his will, Cestius expressly asked his heirs to build his Egyptian-style pyramid tomb in 330 days. If the deadline was not met, the heirs would not benefit from the rich bequeathed inheritance.
Lucius and Pothus hurried in delivering the testament order, so much so that rumor has it the monument was completed a few days early.
A freedman is a former slave who has been released from slavery, usually by his owner.
Hollywood material, if you ask me.
Posted by Eleonora Baldwin at 11:05 AM 13 comments: 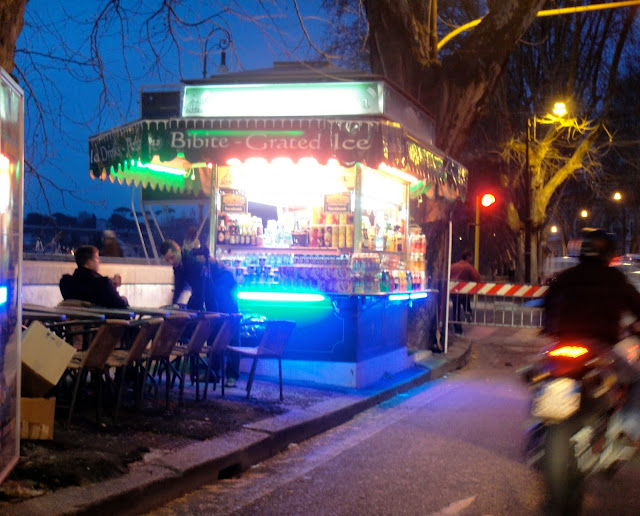 Posted by Eleonora Baldwin at 9:14 AM 11 comments: 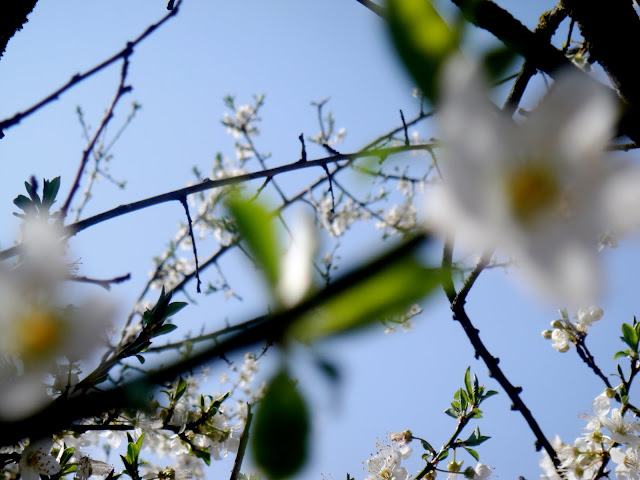 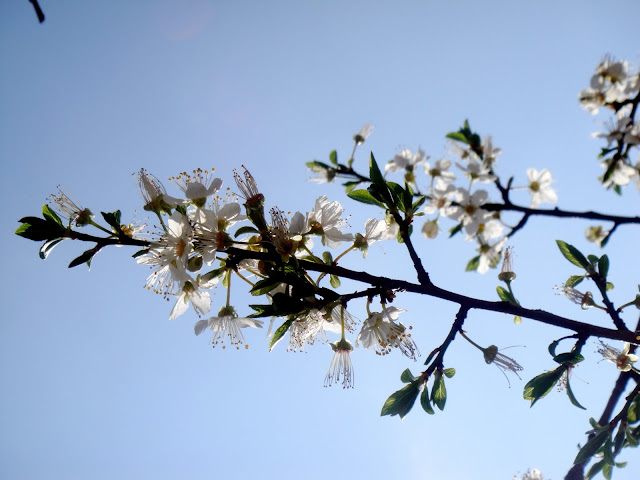 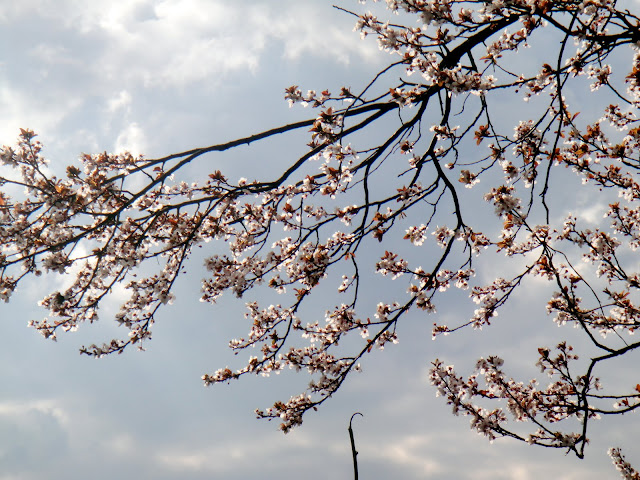 white and pink and grey
The weather changes so quickly in the spring. The sun plays hide and seek with the clouds, jumpers and jackets come on and off at the speed of an eyelid bat. Nature blooms, hormones surge, and beauty awakens with renewed life. 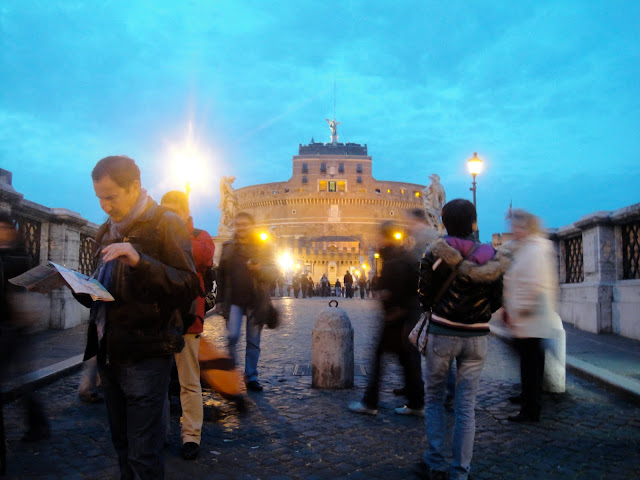 a prison, once
Act III | Cavaradossi is brought in to Castel Sant'Angelo for execution, and bribes the jailer to deliver a farewell letter to Tosca. Left alone, he sings of his memories of life and his love for her.
Tosca arrives, and tells him about Scarpia’s killing and that the execution will be a fake. The soldiers fire, Tosca compliments Cavaradossi for his theatrical death, but Cavaradossi is really dead–Scarpia has tricked them.
Guards rush to arrest Tosca for Scarpia’s murder, but she eludes them by jumping from the parapet to the Tiber and her death.
I love opera.


Placido Domingo as Cavaradossi in the 1992 production performed in the exact settings depicted in the libretto, and in real time.
The orchestra, conducted by Zubin Mehta, was a few miles away.
Posted by Eleonora Baldwin at 2:16 AM 13 comments: 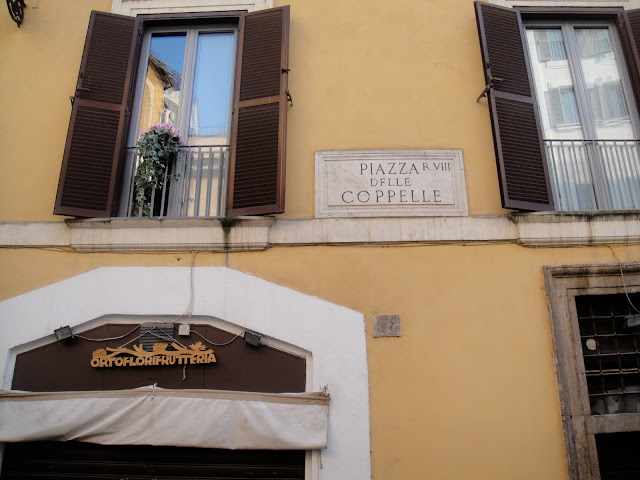 from hammers to hors d'oeuvres
In ancient times, the little square tucked away beneath the river Tiber and the Pantheon–now smothered by clamorous restaurants and bars at night and a busy produce market by day–was originally where workshops crafted small barrels and firkins, or coppelle.
I guess this place has noise in its dna. 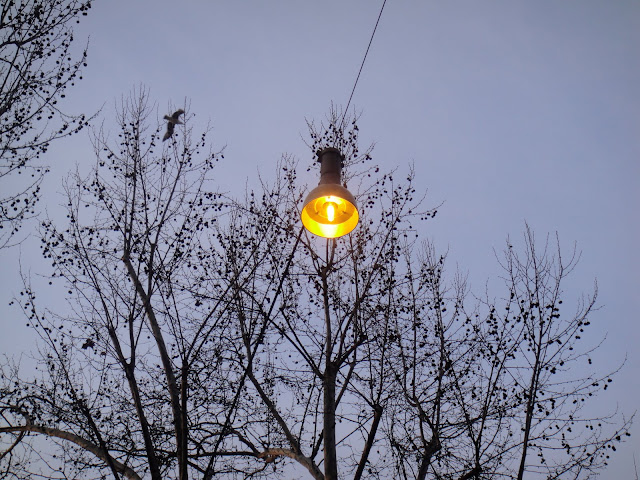 singles and clusters
It was nearing dusk as I walked briskly to my car parked on the Lungotevere. The sun was lazily flirting with the horizon. Gulls were still sweeping above the monuments. The wind was playing with the bare sycamore branches, only one last leaf withstanding. It was not dark yet. And then the streetlamps flickered on.
Posted by Eleonora Baldwin at 8:38 PM 18 comments: 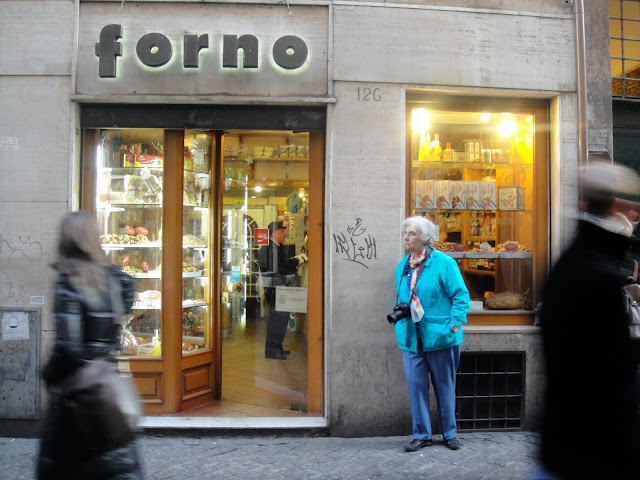 meet me at the bakery
Posted by Eleonora Baldwin at 5:28 PM 21 comments: 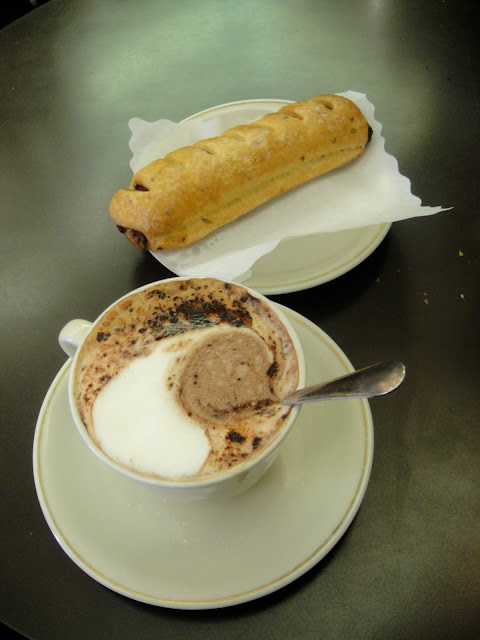 Roberto's magic
My favorite meal of the day (perhaps because it's the first one) is breakfast. Roberto sees me walk into his cafe and even before I reach the busy marble counter, he's already artfully getting my double cappuccino together. As I pour in a spoonful of sugar and  quietly begin stirring, he presents me with a perfectly glazed cornetto. Or a warm pain au chocolat, if that's what he's been making on that day. Not a word spoken, only smiles.
Can't you just smell the joy?
Buona giornata!
Posted by Eleonora Baldwin at 9:24 AM 29 comments: 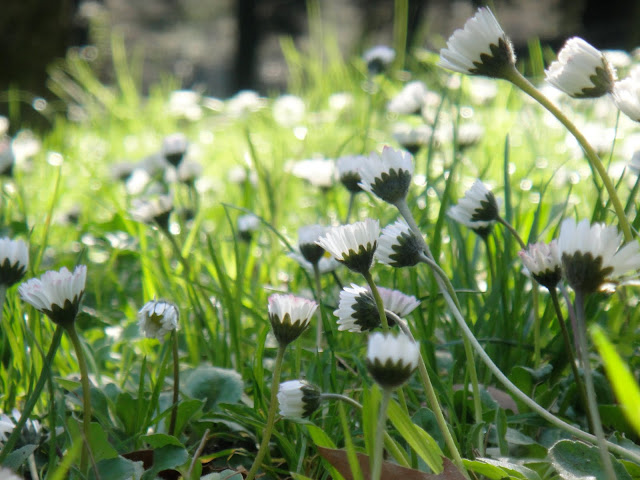 Bellis perennis | homage to Gina
Don't care what the calendar says. It's officially spring. When the wild daisies start to bloom, to me it's spring, period.
The name 'daisy' is a corruption of "day's eye", because the whole crown of petals closes at night and opens in the morning. Here we call this flower "margheritina," a diminutive of Margherita. In both languages this is a beautiful girl's name.
For more Sundays in My City images from around the world, click HERE
Posted by Eleonora Baldwin at 8:30 PM 18 comments: 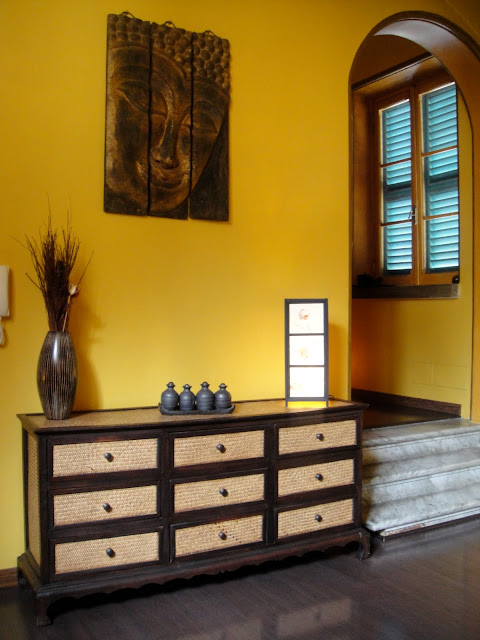 Soft hammered dulcimer music and tendrils of incense fill the air while you wait... 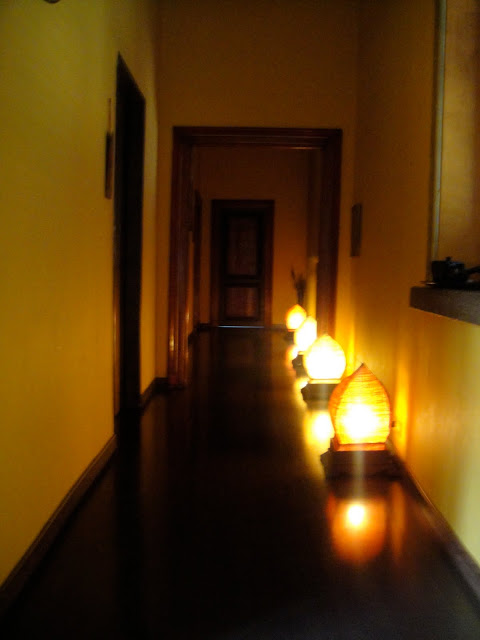 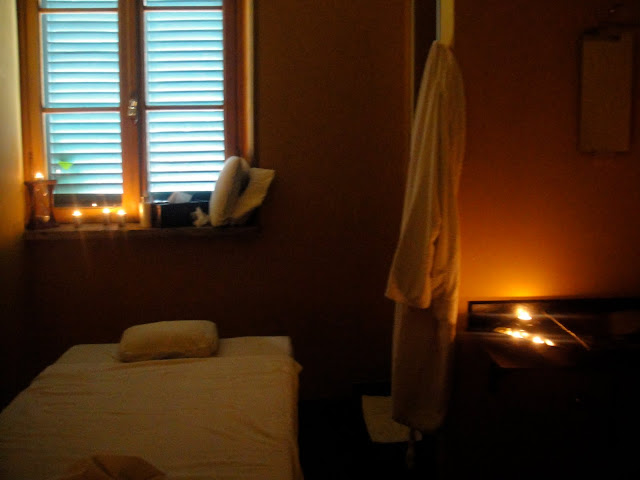 ...to your suite, complete with shower and steam room... 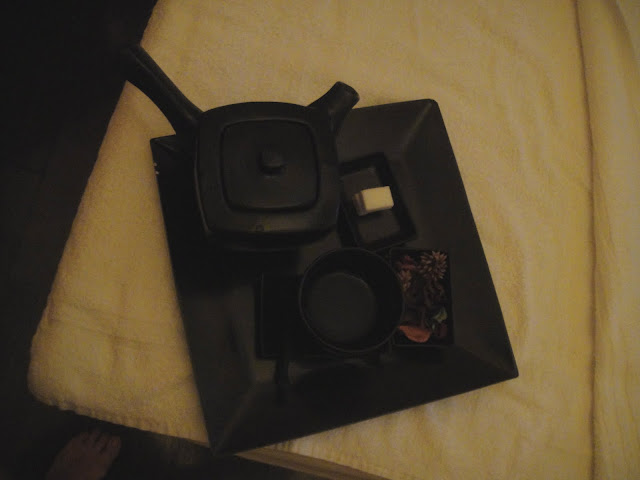 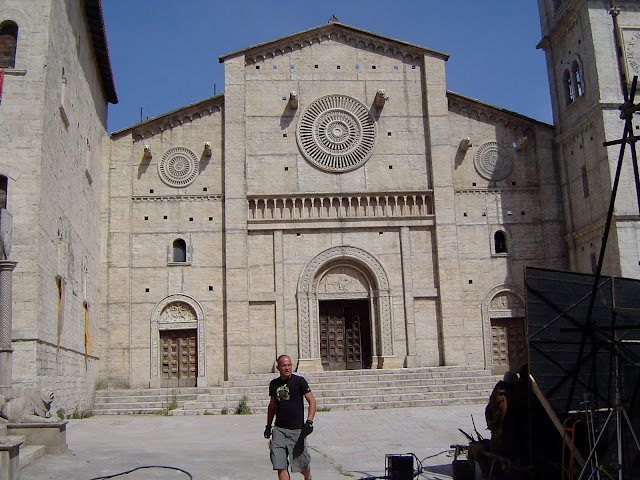 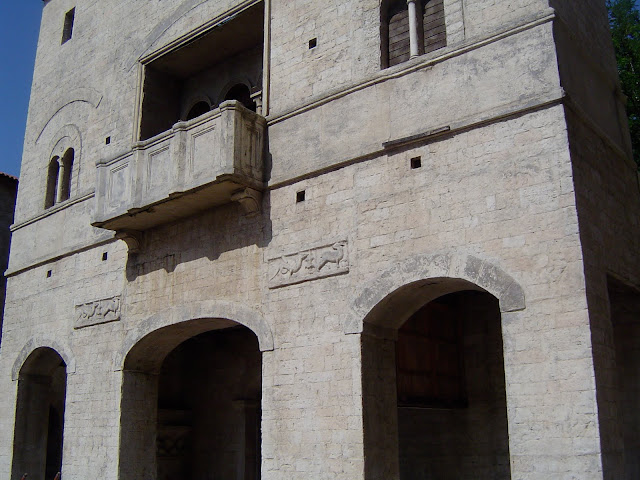 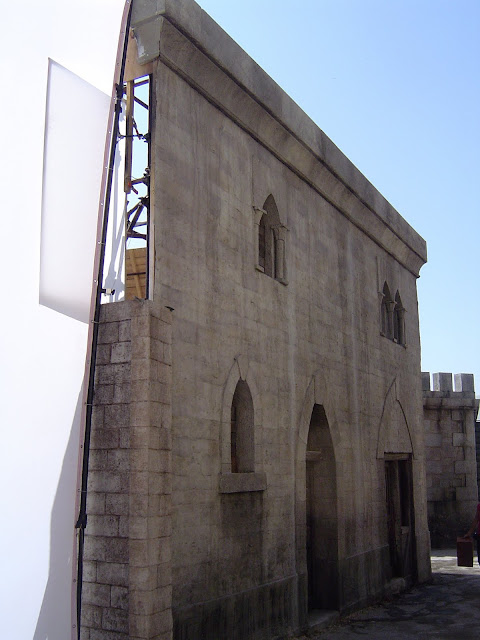 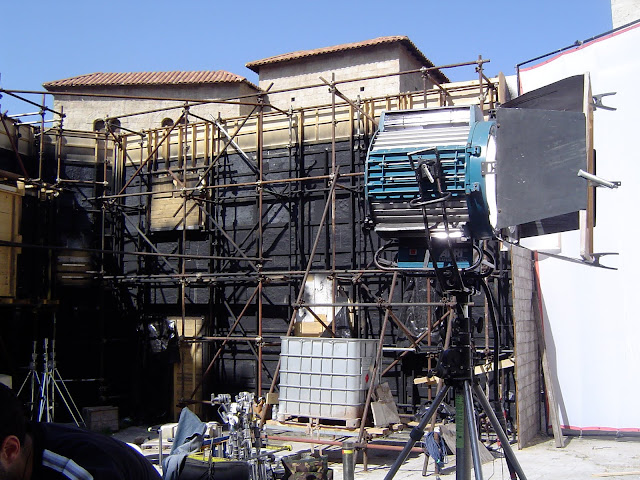 ...and what lies beyond the Assisi square... in Cinecittà studios. 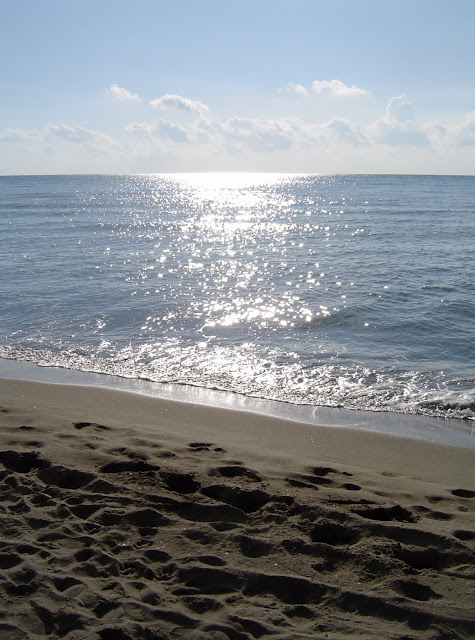 Maccarese
Escaping the city for a morning at the nearby beach (25 Km drive) is my way of unplugging. This is where I come to break free from it all. A walk on the shore, sandy feet, a book, a nap. A light seafood lunch, and another nap. Waking up before driving back to the city makes it feel like perhaps the escape was a dream...

For more Watery Wednesday images from around the world, click HERE
Posted by Eleonora Baldwin at 9:17 AM 19 comments: 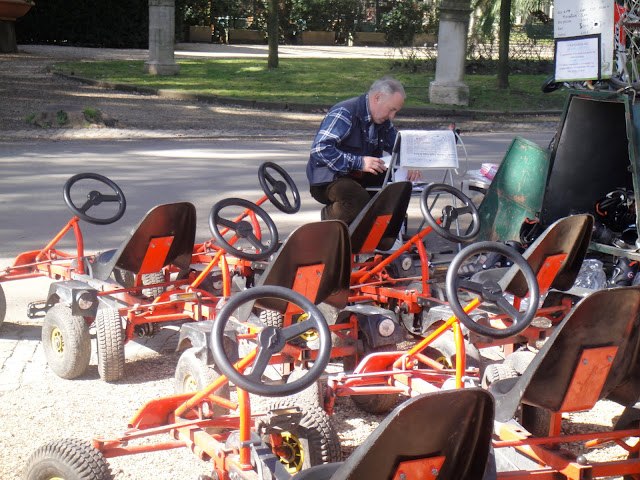 Rent-a-kart
If you've been to the Villa Borghese park, you'll most probably have seen kids (and silly looking adults) zooming by on these odd pedal powered go-karts.
For more Ruby Tuesday images from all over the world, click HERE
Posted by Eleonora Baldwin at 12:04 PM 8 comments: 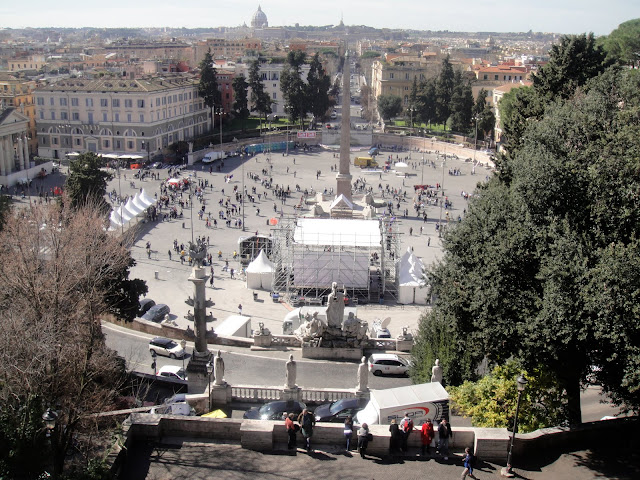 Piazza del Popolo
Unbelievable to think that a few years ago this majestic pededstrian zone was reduced to a parking lot, choked by traffic and chaos. For centuries, the Piazza del Popolo was a place for public executions, the last of which took place in 1826. There are 3 churches in the piazza, and a central fountain with an Egyptian obelisk.
Some big event is being planned, because a huge stage is being built, and there are small gazebos popping up like mushrooms all over the open space.
Posted by Eleonora Baldwin at 2:20 PM 7 comments: