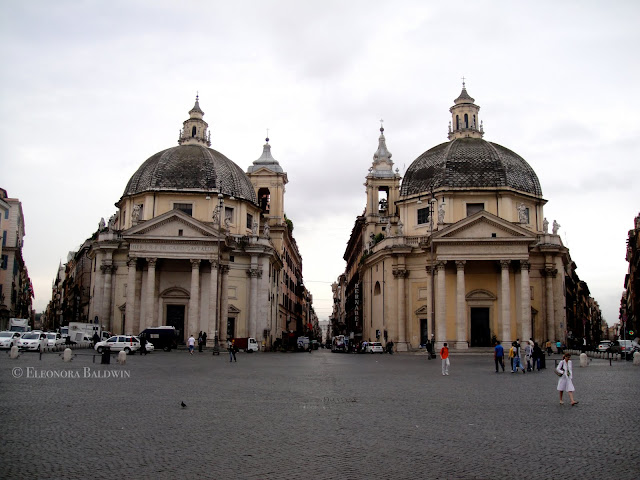 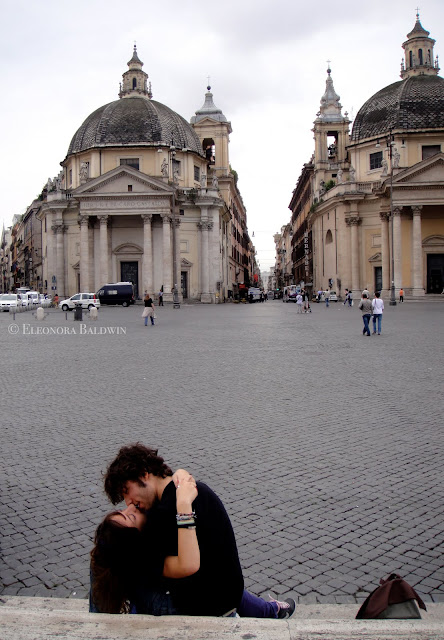 The three roads that fork out of the Piazza del Popolo are referred to as the 'trident.'

The central Via del Corso runs south-west all the way to Piazza Venezia, can you see the monument in the far distance? Via Ripetta, to the right of the twin churches, ends in Piazza Augusto Imperatore, near the Ara Pacis. Via del Babuino, to the left, will take you to the Spanish Steps in Piazza di Spagna.
I was here early this morning, and the grey sky, sparsly populated square and these young lovers entwined in a sweet kiss, set the mood to this otherwise busy and majestic piazza to "very romantic." 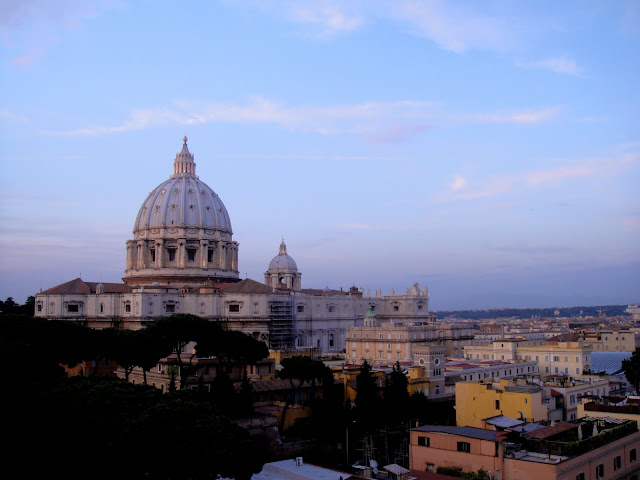 {dusk for dawn}
One of the great benefits of occasionally working in the film industry is waiting around for sunset in order to capture a perfect "beauty shot."
The bells pealed evening vespers, swallows dove overhead in the sweet breeze as St Peter's dome suddenly lit up.
For more SkyWatch Friday© images from around the world,
please click HERE
Posted by Eleonora Baldwin at 11:07 PM 19 comments: 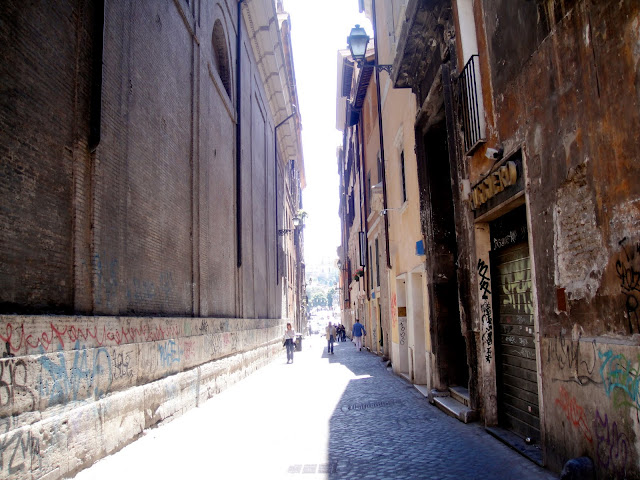 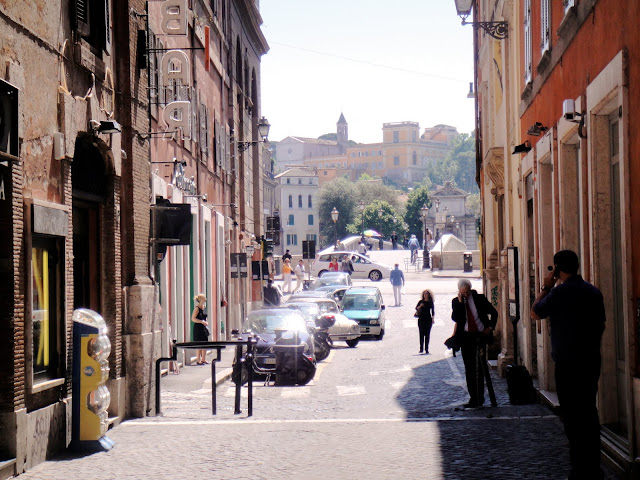 So I ditched the car and took a long, relaxing passeggiata in town. I alighted the tram in Trastevere. After attending a business breakfast, I crossed the river to the Jewish "ghetto" where I met a friend for lunch. We sipped espresso in the shadow provided by Michelangelo's palazzo in Piazza Farnese, and leisurely walked all the way back to the bridge.
Posted by Eleonora Baldwin at 9:56 AM 14 comments: 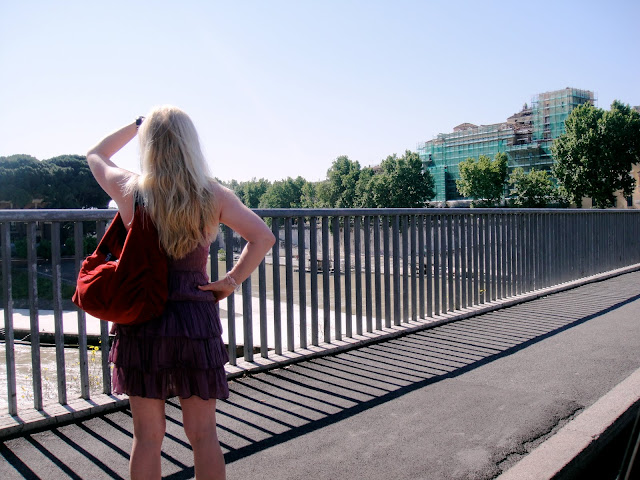 the girl on the bridge 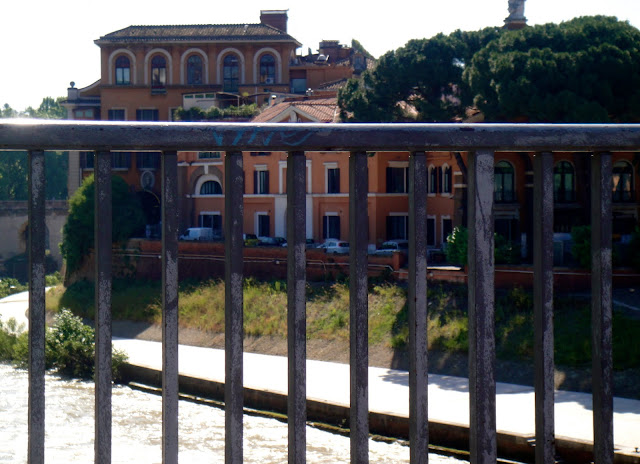 the hospital where most Roman babies are born,
Ponte dei Quattro Capi in the background to the left 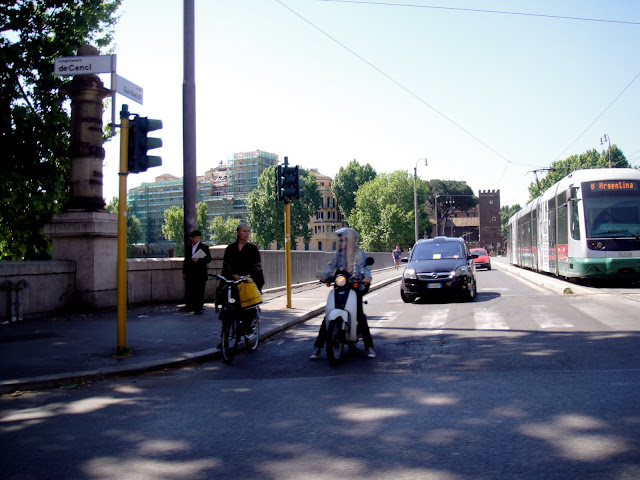 the Sunday morning ambience
Built in 1884, Ponte Garibaldi connects Trastevere to the centro storico and the Renaissance Jewish ghetto. The bridge was remodeled in 1953 and added with the more linear and stark railing parapets.
Ponte Garibaldi overlooks to the east, the Isola Tiberina, Rome's only island on the Tiber, home to the Fatebenefratelli public hospital, the San Bartolomeo Basilica and several very interesting restaurants... 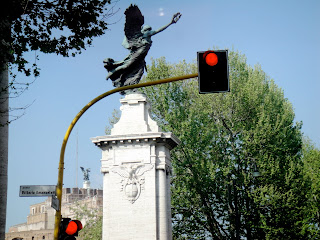 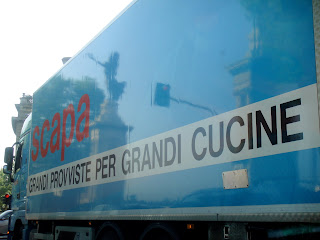 The sign on the side of the big blue truck promises "big supplies for big kitchens."
I took these photos in two separate moments, driving home from work on the always busy Lungotevere. I thought the dyptich could be fitting for this week's episode of Weekend Reflections
Posted by Eleonora Baldwin at 8:10 PM 11 comments: 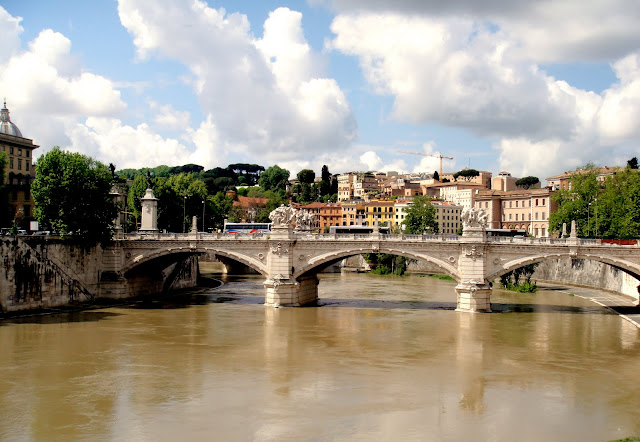 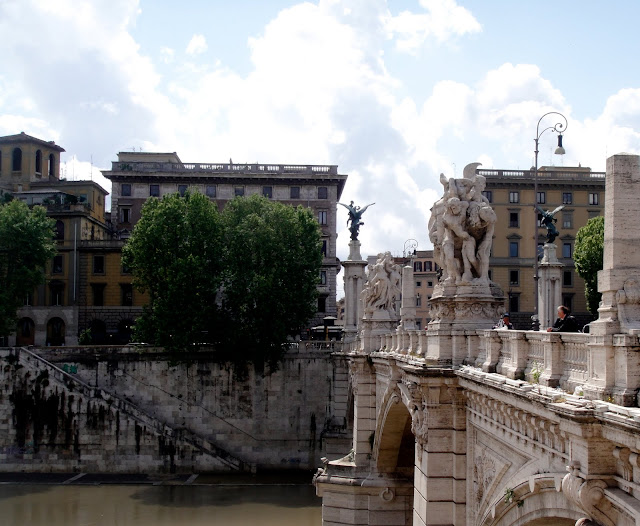 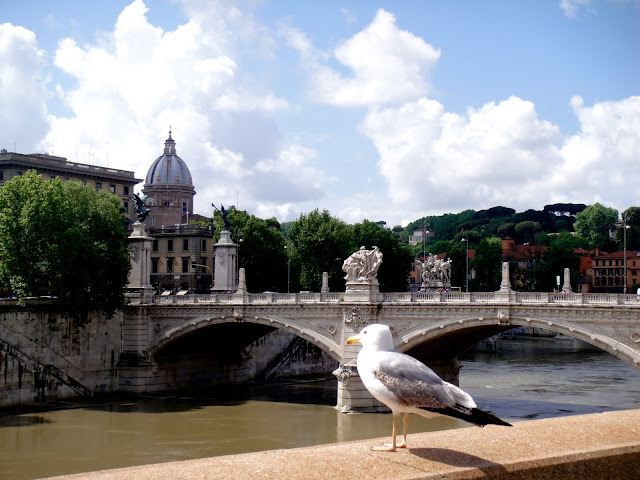 victory
Ponte Vittorio Emanuele II–commonly referred to simply as Ponte Vittorio–crosses the Tiber and links Corso Vittorio Emanuele to Via della Conciliazione, two wide boulevards, the latter of which dead ends in the Vatican.
The 111-meter bridge is supported by 3 arches ad 2 massive pillars that are topped with four heavy allegorical sculptures. The marble statuary groups represent allegories of Liberty, Oppression defeated, Unity of Italy, and Loyalty to the Constitution.
The four end pillars are decorated with bronze winged Victories. 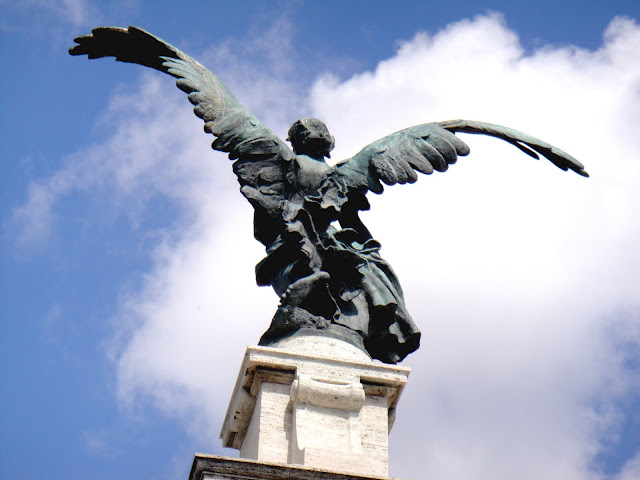 Posted by Eleonora Baldwin at 8:00 AM 21 comments: 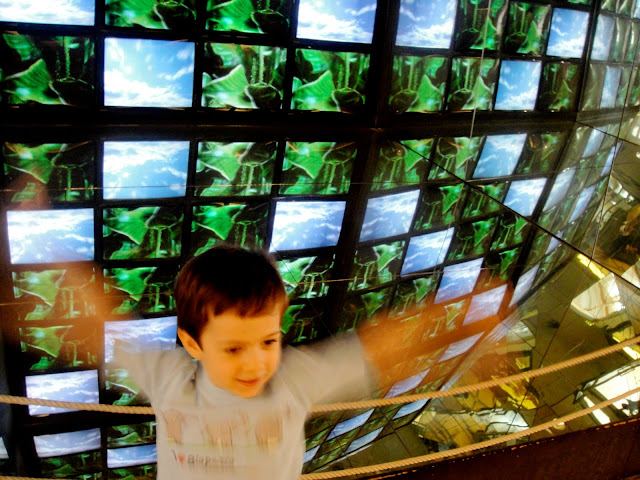 he's flying around the green planet
Curious what a curved surface covered in monitors, inside a mirror box looks like...
While attempting to figure out the optical illusion, head over to Newton Area Photo for more
Weekend Reflections
Posted by Eleonora Baldwin at 5:00 PM 10 comments: 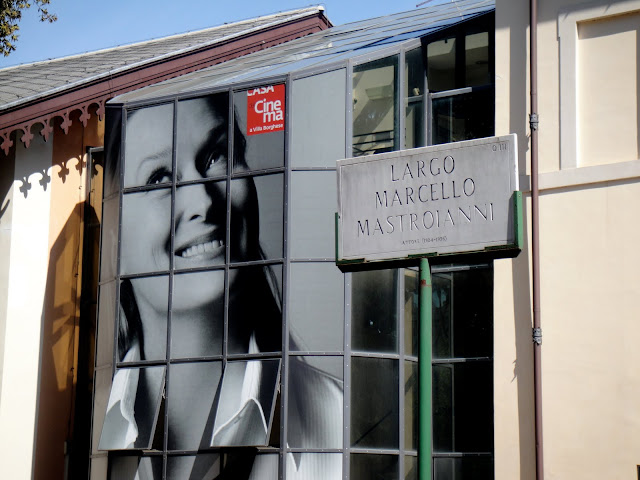 "Marcello... come here!"
While taking a weekend stroll in our neighborhood park, my son and I came upon the familiar Casa del Cinema and noticed how Meryl was swooning at the thought of being in the sweet company of Marcello.
Casa del Cinema hosts events, screenings, photo exhibits, panel discussions, professional association meetings and press conferences–all involving or connected with the seventh art, cinema. The abandoned and completely run down Casina delle Rose building was converted in the Casa del Cinema in 2001, and inaugurated in 2004. Besides the 3 top of the line screening rooms and the many conference spaces, the Casa del Cinema boasts a cafe, a restaurant, a bookstore and an outdoor movie theater seating 200.
The old turn of the century structure has been embellished with more modern additions, and the interiors are elegantly decorated. The walls display photo portraits of international and Italian stars, movie icons and historical filmmakers.
The images on the entrance window rotate. This month it's a 12-foot Meryl Streep. She is among my favorite thespians, she always manages to make me forget she's acting. Marcello Mastroianni–to whom the Casa del Cinema address is dedicated, and a wonderful man I had the fortune of meeting on more than one occasion–always said that he was the luckiest man alive, "This is not work. I'm being payed to play."
Casa del Cinema
Largo Marcello Mastroianni, n.1
Villa Borghese, Roma
Tel. +39 06 4201 6224
Posted by Eleonora Baldwin at 8:29 AM 14 comments: 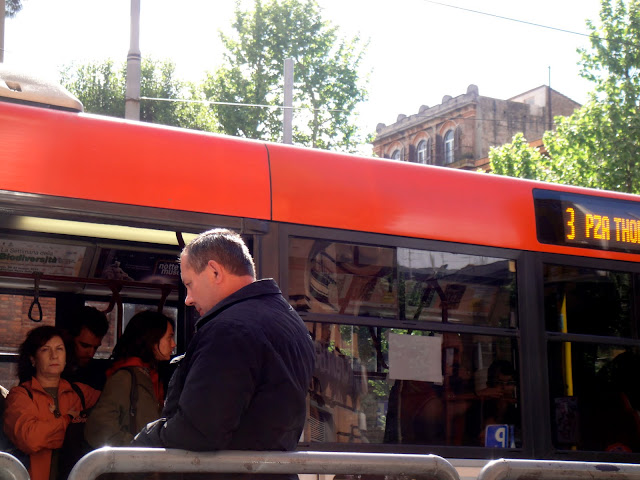 tram stop
For more Ruby Tuesday images from around the world visit
Work of the Poet
Posted by Eleonora Baldwin at 10:43 AM 17 comments: 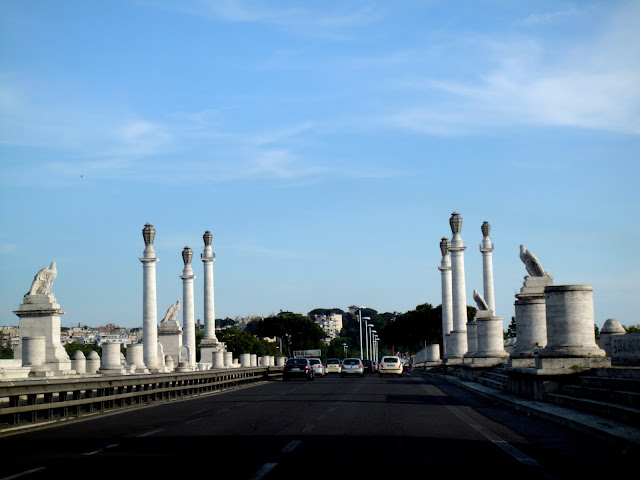 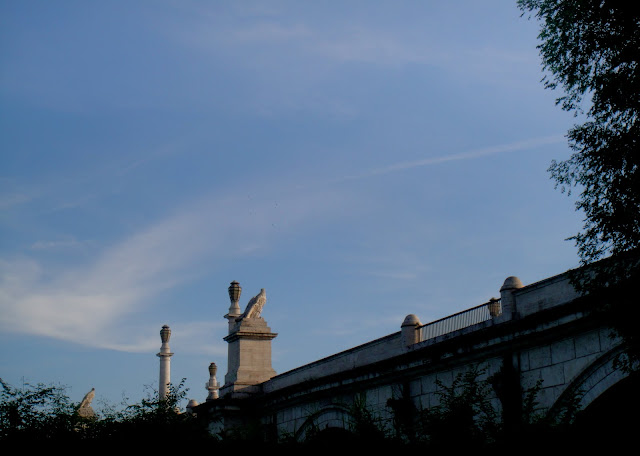 the white bridge
The Flaminio bridge stretches over the Tiber River, connecting the city's northern residential Parioli district to the Vigna Clara and Collina Fleming neighborhoods by way of the Corso Francia and the Via Flaminia. Ponte Flaminio was designed in 1932 by architect Armando Brasini, and construction began in 1939. Work on the 255 meter-long bridge (836 ft) was suspended during WWII, resumed in 1947 and concluded in 1951.
Some regard this bridge as a gaudy Fascist monstrosity. I personally quite fancy it. This bridge reminds me of my school days, when I used to cross it every day to go and come back from school on the old school bus 10. The sight of this bridge is dotted with landmarks, but I'm not talking of the eagles and faux column stumps, not the tall lantern-like beacons nor the travertine fountains. When I cross this bridge, I catch a glimpse of me as a child. I can recall the general panache and energy of my early youth, the melancholy and indolence of teen age, my first romantic enthusiasms, and the budding stages of my love for art, poetry and beauty.
It may not be a stunner like Rome's other bridges, but for me il ponte bianco is a bridge between juvenescence and adulthood.
Happy Mother's Day!
For more images of bridges around the world,
please visit San Francisco Bay Daily Photo,
hosting the weekly Sunday Bridges series. 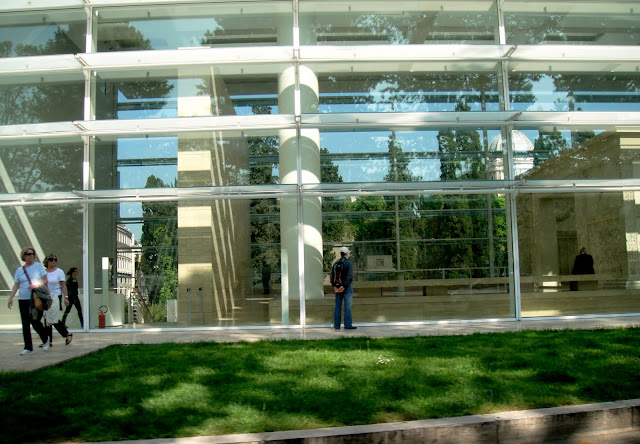 The Ara Pacis is an altar to Peace envisioned as a Roman Goddess. You can see a portion of it to the right of the picture. It was commissioned by the Roman Senate on 4 July 13 BC to honor the triumphal return of the Roman emperor Augustus, from territories now known as France and Spain. It was then consecrated 4 years later to celebrate the peace established in the Empire after Augustus's victories. The altar sought to portray the peace and fertile prosperity enjoyed in Rome as a consequence of the Pax Augusta, The Augustan Peace.
The 2006 Ara Pacis Museum, designed by the noted American architect Richard Meier, was at one point in danger of being demolished or relocated to a suburban site.
Rome’s newly elected Mayor, Alemmano had announced at a news conference that “Meier's building is a construction to be scrapped.”
What is your opinion on this Roman controversy?

In the meantime, while you ponder this, head over to Newton Area Photo for more
Weekend Reflections
Posted by Eleonora Baldwin at 5:58 PM 16 comments: 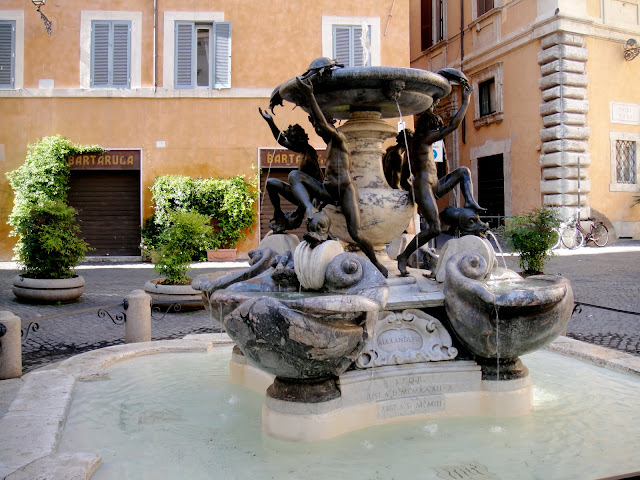 the turtle fountain
The recently restored Renaissance fountain "of the turtles" was designed by Giocomo della Porta in 1581 and built by the sculptor Thaddeus Landini. The bronze figures are standing on four dolphins. Originally there were to be eight dolphins, but the water pressure was insuffiicent, so only four were installed. With the removal of the four extra dolphins, the upraised hands of the statues seemed to have no purpose.
So perhaps to correct this problem and balance the composition, in 1658 Pope Alexander VII commissioned Gian Lorenzo Bernini or Andrea Sacchi to cast an addition: the turtles.
When in 1979 one of turtles was stolen, the remaining originals were replaced by copies.
I love this piazza. I come here to sit and enjoy the water play, the silence of the adjacent streets. And the nearby Antico Forno bread bakery... 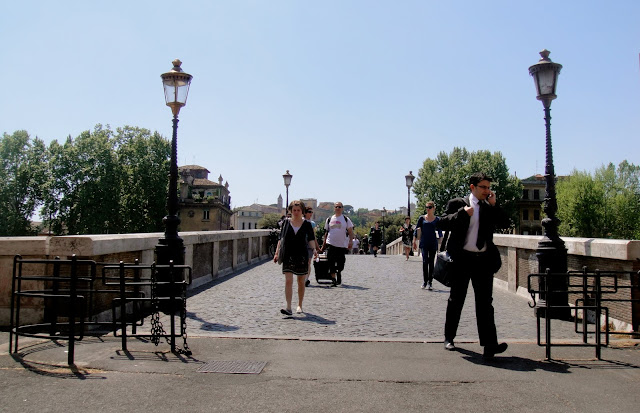 the kissing bridge
Ponte Sisto is a footbridge in Rome's historic centro storico, spanning the river Tiber and connecting Via del Pettinari to Piazza Trilussa in Trastevere. The current Renaissance bridge was built by Pope Sixtus IV (hence the name) between 1473 and 1479 as a replacement of a prior ancient Roman bridge named Pons Aurelius. 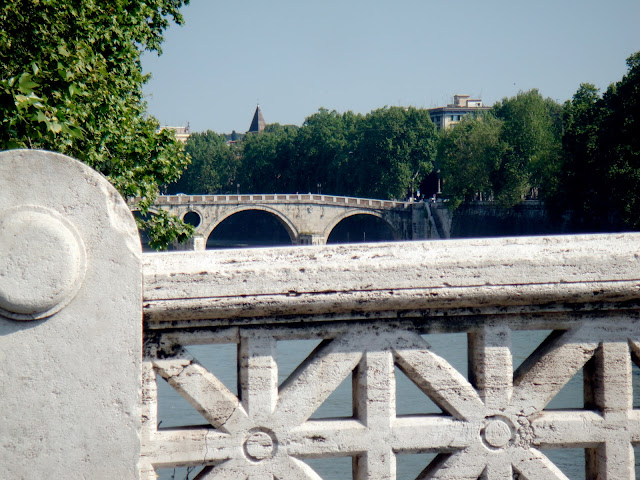 The bridge is characteristic because of its central circular 'oculus' Latin for "eye." It connects two very fashionable night-life areas near Campo de' Fiori and Trastevere, and has become part of Italy's pop culture, recently featured in films, music videos, and ads.
I shot a film on Ponte Sisto a few summers ago, and our crew was a motley one indeed, young, reckless, stealing images with a hand held 16mm camera, no permits to shoot in that location and with an actor who had indulged in one vino too many.
The unpredicted gift of a spectacular sunset and an unexpected couple kissing passionately in the closing frame of the romantic scene of the solitary protagonist who returns to Rome after many years, was just perfect. It's one of my favorite parts of the film.

Posted by Eleonora Baldwin at 1:06 AM 15 comments: 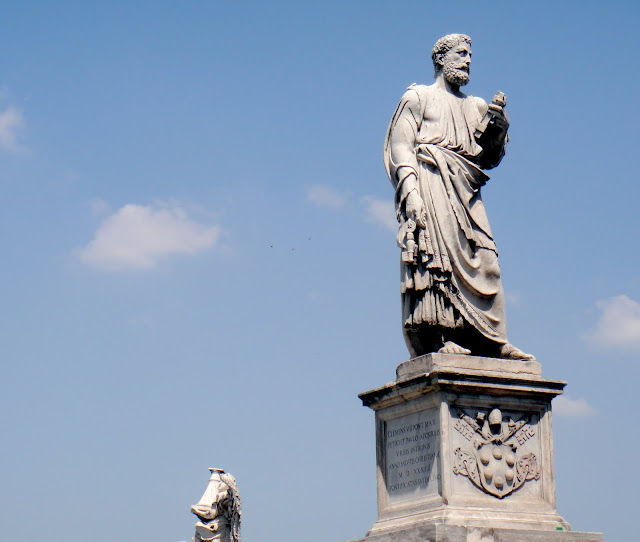 Peter, sculpted in 1535
The more famous 10 Bernini angels lining the Ponte Sant'Angelo bridge were added in 1669.
Click to visit more City Daily Photos of STATUES
Posted by Eleonora Baldwin at 10:37 AM 13 comments: